A quick snow and more cold on the way

Did anyone else check the radar yesterday as much as I did? Probably not. If you did, you would’ve seen that there was snow falling across much of the state….but not Denver. Which brings me to my first point of this blog. Denver is well below average in the snowfall department. 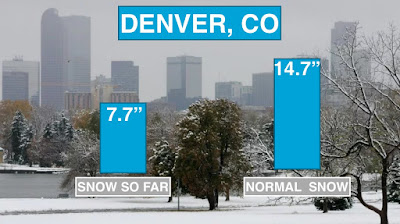 Maybe we’ll get some soon. As of right now though – there are no signs of significant snow for Denver – or Colorado.

I am watching something interesting. There a developing closed low that going to roll onshore to Southern California for the second half of the week. That will be a big weather maker for the entire country south of interstate 40. I’ll talk more about that in an upcoming blog post. What this storm will do for Colorado is bring a chance of snow to the Northern mountains Wednesday evening.

See the swirl off of California. That’s out next storm (and the possible south eastern winter storm)! This system is bringing a lot of moisture with it. Great news for SoCal. Not the greatest news for us here in Colorado as much of the state won’t be seeing too much precip.

What you’re looking at above is the accumulated snow through Saturday. It’s sporadic and meh. I would assume only the favored slopes will pick up more than a half of foot. Most higher elevations will be in the realm of 2-6″. Again, no snow for Denver.

One other thing this Cali storm is going to do is bring in a reinforcing shot of cold air for the Front Range.

Temperatures are remaining below average this entire week. Normally in Denver we average a high in the mid 40s this time of the year. On Thursday we’re going to struggle to get out of the 20s! Then we’ll begin to moderate a bit. 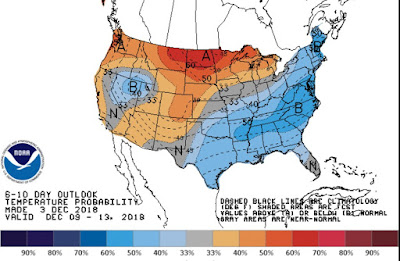 Between December 9 -13, we have a 40-50% chance of seeing a warming trend. Good odds for us so if you’re not a fan of the below average cold, just wait till next week. We’ll be better. 😀

Other than that, enjoy the weather!