Well, it’s about time we got some more snow up in the Mile High city.

The little disturbance I talked about that you may have read in my last blog is looking to over perform and who doesn’t love an over performer?

FIRST: Thursday, today, is going to be warm. Like 10-15º warmer than it should be so enjoy it if you’re not a fan of the snow.

Friday – we will likely wake up to snow falling and *maybe* snow on the ground. It will also be snowing through much of the day Friday. At times the snow will be heavier, at times it will be flurrying. By Friday night, snow will be tapering off.

Now, with temps hovering around 32º, that means the roads may OR may not be impacted. I will say that you should expect a nasty evening commute for Friday PM.

We have the potential to pick up the most snow out of any storm thus far this season tomorrow. It’s been a slllloooooowwwww season already. We’ve only picked up just over 6″ of snow at the Stapleton airport. We should have received over 20″ so far if this were a typical year. This next storm could bring us 3-5″ of snow for Friday!

There is the potential to get more though…the NAM which is the North American Model only goes how about 3 days. So, it’s a little bit more fine tuned than the Global models. With that said, it does use the Global models for reference and then ingests a few more specifics. The NAM has Denver getting about 7-8″ of snow! Whereas the EURO and the GFS have between 1-4″ of snow. 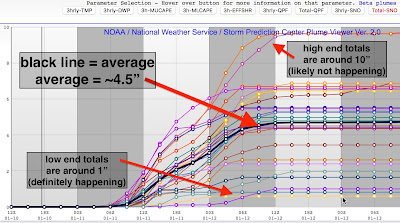 I’ve spoken a lot about Denver and rightfully so but the rest of the state is expecting snow as well. The mountains could get a few inches of the fluffy stuff but honestly, Denver and areas to the south may be where the bullseye is.

So, here’s to hoping its a big one! As of right now there are no advisories or watches up for this event. I think the NWS will change that after the next few runs of the models come out. After this we calm down just a bit but there are a few more disturbances that could bring us some fun and interesting weather.

2 responses to “Snow coming to Denver….Finally!”