Some Snow and Your Weekend Weather

Giving a quick update on what’s happening here in Colorado. The big story is the far reaching winter storm that is expected over the next few days from Lubbock, TX to the Carolinas. More on that later.

Colorado however – no such thing as a winter storm here. If you woke up and looked outside today, pretty much anywhere along the Front Range and adjacent Plains, you’ve probably noticed some flurries falling! While this won’t accumulate – I think it makes this cold day a little bit better. 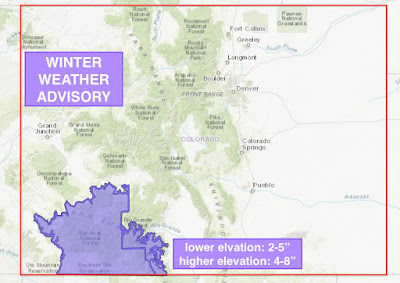 Through Friday PM – the San Juan mountain range and areas of SW Colorado can’t expect some measurable snow! This is awesome news for them but plan on really tough travel at times if you’re in and around the area.
Aside from the snow – temperatures will be the next topic of concern.

A day with temps barely breaking out of the 20s for The Front Range – may not even be out of the teens for the mountains. Brr. Continuing through this week – warmer temperatures are expected. Warmer in the realm of back to around average! Woohoo.

Now – aside from this little disturbance rolling through today and tomorrow – not much is expected through mid-December. This is okay! POW lovers – not the greatest conditions BUT so far this season we’ve been on a 3-4 week cycle. Meaning that we have to wait 3-4 weeks before our next pattern change moves in. Out last active pattern came to an end at the end of November into early December which puts our next active pattern to move in by the end of the month.