Alright folks, who hasn’t heard of the “big storm” coming this weekend? If you haven’t, you’re about to hear wayyy too much.

First off, simmer. The images you’ve seen of 12-18″ of snow for the Carolinas are coming out WAY too soon. It’s almost degrading to see mets (meteorologists or social “media”ologists) post about a storm of that magnitude so far out with such little confidence. If you follow any of those peeps, why don’t you go back after the event and see what they forecast last weekend compared to what actually happens. 🙂

So what is happening? Well, we have a classic southern tracker storm rolling in. Can you guess where it’s coming from? The Pacific! Take a look:

That big swirling mess is the storm! The video above was taken Tuesday morning which means that this storm has to track across the ENTIRE country before it gets to the southeast. We have time.

So what’s in question? Haha what isn’t in question is more like it. Snow, ice, sleet, freezing rain, regular rain – it’s all possible somewhere in the Carolinas. What makes forecasting in the Carolinas so hard is that we are pretty far south and during this time of the year there typically has to bea perfectly timed cold front approaching and precipitation match up. That doesn’t usually happen the way we want it (to get all snow at least).

Let’s dive into some specifics and also unknowns.
Specifics first.

Above is the EURO model (I’m not claiming which model is best during winter weather but history has proven that some are better than others). all I’m showing with this image is that fact that precip will begin to move into the SE by Saturday night and Sunday morning. During the weekend…there will be enough cold air around for some kind of frozen precipitation to fall. As we continue to endure this storm – cold air will be around but will be be in the right place and will there be enough of it to keep everyone at all snow? Most likely – not everyone.

Something fun (meteorologically) will happen this weekend. A CAD (cold air damming) event is likely. What’s that you ask? Take a look:

Here’s a look at temperatures nationally on Sunday morning. Notice the center of the low is sitting over North Florida. The flow around a low pressure system is counter-clockwise. Thanks to the Appalachian mountains – cold air from the north and east get “dammed” up against the mountains (hence the funky arrows across the Mid-Atlantic). CAD is interesting – most of the time (thanks to the general low elevations of the Appalachians) cold air is very deep on an atmospheric level. What I mean by that is that yes, cold air may get dammed against the mountains but it may only be 3-6K feet deep and we all know the atmosphere is taller than that. That brings me to my next point. 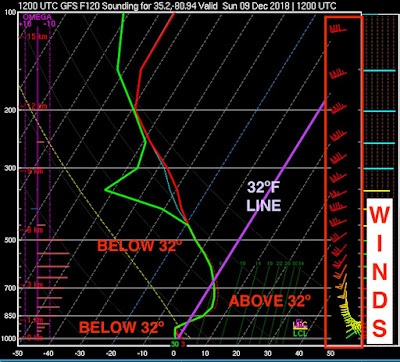 This mess of an image is a Skew-T that I tried to label as neatly as possible. When the NWS (National Weather Service) launches a weather balloon, it has instruments that measure multiple parameters of different levels of the atmosphere (i.e. temp, dewpoint, wind direction, wind speed, etc.). This is the image it produces. It’s actually kind of easy to read. Where we stand on earth is the bottom of the picture – the atmosphere as we know above us – it the remainder of the image.

So look at the SFC (surface). Mind you this is for Charlotte in the middle of the storm. At the SFC, temperatures are below freezing but as you go up, lets say, 2500-3000 feet in elevation, temperatures rise above freezing! Say what?! Isn’t is supposed to get colder as you go higher up in elevation? Ladies and gentleman, welcome to the struggles of forecasting. That “warm” layer where temperatures are above freezing is about 4-6K feet deep. That’s big. Plenty of time for any frozen precipitation that falls through it to melt.

Another struggle….I’m showing you still images but the atmosphere is fluid as hell. So although the skew-t image above is for Sunday morning…by Sunday afternoon it could be completely different. Again, welcome to the struggles of forecasting winter weather in the southeast.

Now it’s time for the unknowns.
1) TEMPS TEMPS TEMPS. We don’t know how much cold air will be in place. If this storm system is stronger, with stronger winds, we could assume that there would be more cold air getting infiltrated – we could also assume that there would be more moisture with is. And where is the moisture coming from? The Atlantic and the Gulf of Mexico. Very warms bodies of water. I sense another forecasting headache.
2) Timing. This storm is supposed to last from essentially Saturday night to Tuesday morning which means plenty of diurnal and nocturnal temp cycles to go through. Why is that important? Easy. Temperatures are usually warmer during the day and colder at night. Cloud cover limits day time highs and usually keeps overnight lows warmer. Ugh, another temperature issue.

Right now, we’re all (all of us meteorologists) using global models because those are the only ones that go that far out in time. Once we get a little closer, we can start using mesoscale models which have better solutions to issues like this…sometimes.

Wanna see some accumulation maps? I know I do!

Here’s the GFS and it’s thinkg (right now – as of Tuesday afternoon) of what to expect total for this event.

The GFS is mainly showing a snow event. BUT even a little bit of ice and freezing rain and cause big issues. We know this. So take this with a grain of salt and the understanding that the GFS is thinking that EVERY type of precipitation could fall across the Carolinas. (BTW – this is just ONE model run. Some of the previous runs had no snow, some had no ice – this is not a final forecast)

This is the EURO. This has a little bit more of an icy mix around the Carolinas. Essentially, the models are still not in great agreement with this storm. As expected. (BTW – again, this is just ONE model run. Some of the previous runs had no snow, some had no ice – this is not a final forecast)

THE TAKE AWAY. We know something is going to happen. Models know that too. It’s really going to come down to temps right before and during the event to see what happens.
We also know that the Carolinas won’t be the only ones impacted by this storm. Remember it’s traversing across the country?

My thinking? Well, remember what happened in NYC a few weeks ago when that were preparing for a few inches of snow and got hammered by the snowiest storm in November on record? That was because there was a lot more cold air in place than anticipated. There has been a lot of cold air this season already so I would forecast snow a tad bit more liberally (mainly for the NC mountains) because of that. I won’t put out totals just yet but I think we could be looking at a decent snow storm.
Stay tuned!