This week in Colorado Weather

It’s been a relatively quiet weather week for us here in Colorado. The mountains picked up some snow. Over the weekend, some mountain passes and ski resorts got more than a half of foot of snow!

Now, what about this upcoming week? It’s going to be generally a quiet week with one blip of snow by Wednesday PM into Thursday for the mountains. Denver may actually see some snow from this – but it won’t accumulate. Just some pretty dendrites to fill the festive sky.

DID YOU KNOW: There were two earthquakes early Tuesday morning near Glenwood Springs, CO!? Anything over a 3 you would likely feel – if you weren’t asleep. 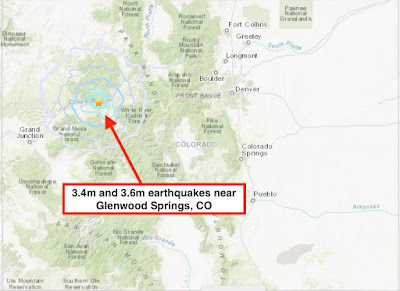 Another ‘cool’ thing happened recently. Denver has one of it’s driest moments EVER yesterday. So the NWS does weather balloon launches daily to get a sample of the vertical atmosphere – this gives them an idea of what’s going on way above our heads. One parameter that the weather balloon captures is how much moisture is in the air. Check this out:

Notice where it says “0.02” of Precipitable water”….well, if you take the entire column of air that was sampled and condense it or “squeezed out” all of the water in that column – that’s how much precipitable water you have. 0.02″ is a ridiculously low number. Likely one of the top ten driest soundings in Denver’s recorded history! So, if you applied a lot more lotion or chap stick recently – that’s why.

Okay, moving on to the forecast. Wait, actually, did y’all see the sunset the other night? It was on point.

I love a good Denver sunset. There was a mountain wave cloud and some awesome lents (lenticular clouds) out there!

Ok really now, forecast time. This week won’t feature too much. The occasional snow shower and some mild temperatures will be with us.

This is the accumulated snowfall map through next Monday (although I really should’ve just taken this through Friday). We have a little burst of snow that is going to move through and that is going to bring the mountains maybe 2-4″ of snow from Wednesday PM to Thursday. Nothing tremendous and nothing to really worry about. If you’re traveling in the mountains Wednesday night – you’ll have some slick roads but it won’t be (or shouldn’t be) impassable. Notice also how the Front Range (with the exception of Denver) will maybe* get some snow. Those grays are in the realm of 1″ so again, nothing substantial.

TEMPS: Those are my next topic. Temperatures, if you haven’t noticed, have been warm lately! It’s felt kind of nice actually here in Denver. I haven’t minded it but I definitely want some snow. Doesn’t look like that’ll be a thing until maybe the Christmas holiday.

Friday will be our cool day of the week where temps will struggle to get out of the low 40s. Every other day though…warm. We may even have a 60º day coming up too! #DenverInDecember

That’s all I have for now!