This Week in Colorado Weather

Hope you’ve enjoyed the New Year and the Holidays.

I want to catch back up and talk some weather! First up: Today, Monday January 7th.
It’s a pony tail and hat (maybe) kind of day. The winds have been picking up and they’ll continue through tonight. 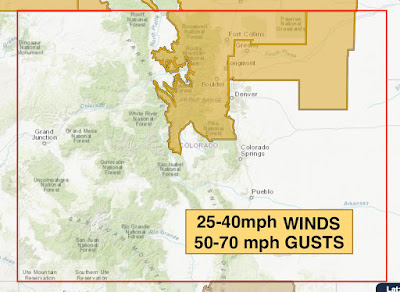 We’ve had plenty of 40-55 MPH gusts already today in the highlighted areas and this will continue through the evening. This wind event is kind of special. It’s known as a Bora wind event. What is that? Well, Bora winds are “a regional downslope wind whose source is so cold that it is experienced as a cold wind, despite compression warming as it descends the lee slope of a mountain range.” Pretty cool huh? Pun intended.
The mountains are picking up some great snow too! Totals will be between 6-12″ total for this event and it’ll be windy up in the mountains too. Blowing snow and limited visibilities will be a concern. I think today was a great pow day but tomorrow should also be a very good pow day (and less windy too). 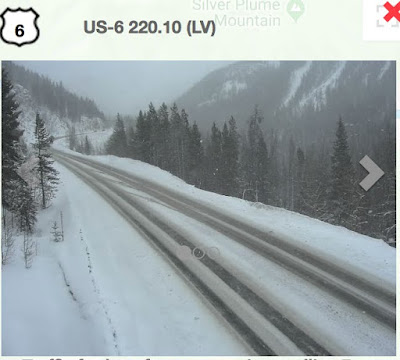 Loveland Pass Midday Monday
Now, this upcoming week – it’s going to be dry and the wind will be calmer. Expect a fantastic week in Denver and much of Colorado. There isn’t much snow expected but I’ll touch on that too.

Normal this time of the year Denver averages a high in the mid 40s and overnight lows in the upper teens. We won’t be too close to any of those. 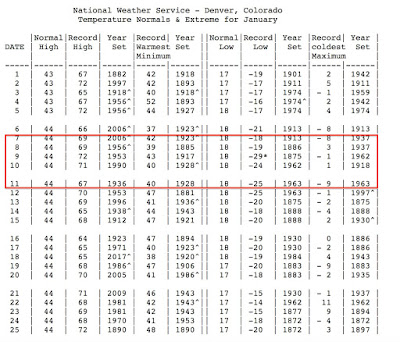 AVERAGE temps for this week.
Most daytime highs, even though the graph above shows multiple days with temps in the 40s, will be in the lower to mid 50s. This is because the dry pattern we’re going to be in will also bring us westerly winds. When winds come from the west they are coming from the high mountain peaks to the flat Plains. This is called a downsloping wind and that cause temperatures to warm since the air is being compressed. In all, expect most days this week to be in the 50s with plenty of sun!

Bad news: we really need some moisture around here and we’re not getting it. We’ve barely had any snow in Denver (with the exception of 2 storms bringing less than 10″ of snow cumulatively).

This is the Euro (ECMWF) model. I just brought it out all the way to the 17th of January and although we are expecting some snow across the state, nothing is going to be extreme. Our next snow maker for the Plains will likely be at the end of this week. But again, it’s not showing much and barely anything for the Denver metro. The mountains may pick up 2-5″ of snow in the next ten days. Meh.
That’s all for now! Enjoy the week!