Here’s a quick update for anyone with concerns about this winter storm. I’ll try to make this quick but I have a tendency to give way too much info. Oh well. Read on!

I want to start from West to East.

That is our storm bringing SoCal a decent amount of rain! Great news for them. This system is anything but mature. We’ll have to wait till Friday for this system to really start cranking and it’ll likely continue to organize through the weekend.

Winter storm alerts are already expanding across the Central Plains. This could be a very significant event for them. Especially since ice is going to be a concern. We’re talking about huge travel impacts and maybe some significant impacts to the grid as well. If you have plans to travel the I-40 corridor Friday-Saturday in this area – good luck. Maybe change your plans.
This storm is going to tap into the Gulf of Mexico for some energy and moisture. That’s why totals are so high in some areas. Rain will also be a big concern though… 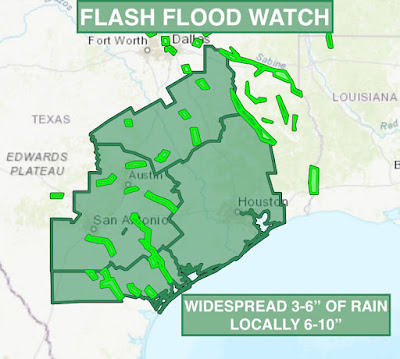 That’s a lot of rain. Houston and areas that normally flood from excessive rain events like this – will likely have issues Friday into Saturday. Now….what’s happens after this?

There’s unfortunately going to be a lot of uncertainty with this event right up until we get to the start. That sucks but that’s how it is with these storms. There’s a lot of unknowns that you’ve probably heard of already – like temperature – the biggest concern. I don’t want to get into as much detail as I did before (btw if you missed my other blog – I break down a lot of the concerns that I’m still debating today. Check it out here )

For lack of time on my end and for sake of keeping things general….here’s a probabilistic map of what to expect. 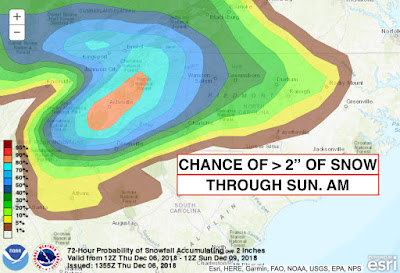 The map above shows that much of the State of NC can see some snow. Best chances up in the mountains for sure but nonetheless – a chance of snow exists elsewhere as well. More than 2 inches of snow is enough to cause BIG issues in the Carolinas. 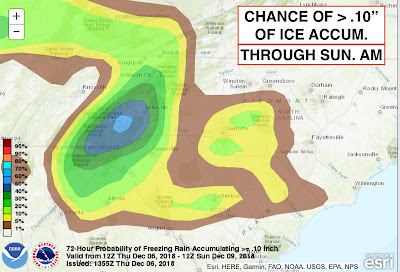 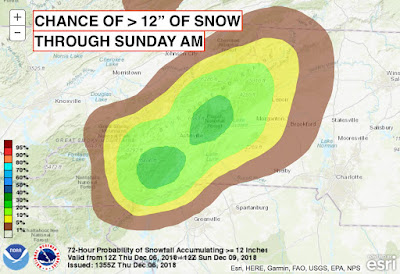 This map is just for fun…kinda. This is the probability of getting more than a foot of snow! Again – this is mainly confined to the mountains but a foot of snow would put this as one of the biggest winter storms in recent memory for the area.

Another thing I want to mention is that I’m not talking much about sleet. We know what sleet is and we know what it can do. Sleet is super tricky to forecast but here in the Carolinas when we have an event like this – sleet is usually what busts a forecast. Sleet is heavier than snow so it crunches it all down. It’s tougher to plow – heavier to shovel and over just kind of annoying. That is a concern we have to look for still.

We’ll have to be patient and watch the trends going forward but go ahead and start preparing for a nasty end to the weekend and start to next week!